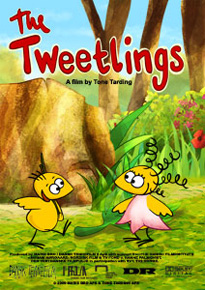 MICE IN A ROW
Saxe can count. So when Sille and Saxe take on the job of minding Vigga’s brothers and sisters Saxe reckons it will be easy-peasy: they can simply count them. Unfortunately none of the mice is willing to stand still long enough to be counted and suddenly they have all vanished.

THE FOUNDLING
Sille and Saxe find an egg that has got separated from its mother. The egg hatches and off they go to find a home for it. But he is so cheeky that nobody wants him.

THE PRINCESS AND THE GUARDSMAN
Sille is playing that she is a princes. Saxe stands guard but a swarm of ants tickle him and make off with Sille’s precious crown.

DOWN BY THE RIVERSIDE
Sille and Saxe go down to the river. Saxe wants to go fishing, but it isn’t easy with the frogs singing and the cuckoo chicks splashing. When he finally catches a fish he and Sille decide to let it go.