The boy who wanted to be a bear 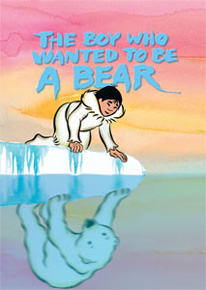 In a den in the fells a polar bear gives birth to a cub – but  the cub is stillborn. In a cabin some way off a woman bears a strong and healthy boy. The polar bear is so grief-stricken at the loss of her cub that she lies down on the ice to die. Her mate, therefore steals the woman’s baby and brings him out onto the ice. The little boy is raised by the she-bear, learning all the skills a bear requires – no easy task for a little boy!  The woman grieves deeply over the loss of her baby. and the man vows to bring back the boy and kill the bear. And then the hunt begins.  When the man finally finds the boy’s tracks in the snow, he kills the bear, and the little boy is returned to his mother.  But the boy can’t settle down among humans; he feels that he is a bear.  He heads back to the fells to find out how to become a REAL bear, seeking out the Spirit of the Fells who tells him that if he really is a bear the way he claims to be, then he must undergo the three bear trials: He must fight The Sea, The North wind, and worst of all, Loneliness.