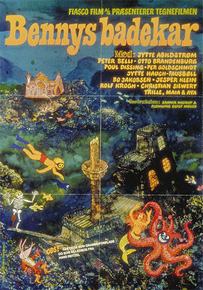 This classic animation film which is created by the veterans Jannik Hastrup and Flemming Quist Møller has been nominated a part of the Danish cultural heritage. The film deals with the boy Benny, who is bored by living in the high-rise building and with parents who have never had the time to talk to him. He walks out to collect a tadpole, which he then brings back to the bathroom. The tadpole turns out to be a transformed prince who together with Benny dives down to the bottom of the bathtub, which then becomes the big ocean. Here he experiences a series of exciting and adventurous things which he otherwise misses in the daily life.